by Kalman J., Kaplan (Author) and Matthew B. Schwartz (Foreward) 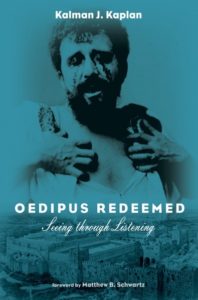 An initial play, Oedipus in Jerusalem, related the narrative of Nathan, the biblical prophet, encountering the blinded Oedipus wandering alone outside of Thebes. Nathan brings him to Jerusalem to be tried at the Jewish Sanhedrin. The Greek playwright Sophocles is the prosecutor, and Nathan serves as the defense attorney. Oedipus is acquitted, but he refuses to accept his acquittal, shouting, “I am guilty! I am guilty of patricide and incest.”Oedipus Redeemed focuses on Nathan and Sophocles combining forces to present Oedipus with two dialogues of historical/biblical characters within the play. The first contrasts the suicide of the Greek Zeno the Stoic after a minor mishap with the life affirmation expressed by the biblical Job after monumental losses. This is designed to uncover the possibility that Oedipus is experiencing shame rather than guilt (after all, he did not commit suicide until after he blinded himself). Nathan and Sophocles focus on the secondary psychological benefit Oedipus has received from insisting on his guilt, and on his coming to terms with the fact that he had blinded himself needlessly if he was innocent. The second dialogue between the biblical prophetess Judith and the blind Greek seer Teiresias focuses on the biblical story of Samson being betrayed by “following his eyes.” Insight is contrasted with sight. Oedipus’s surviving daughter Ismene reunites with Oedipus, telling him she loves and needs him. The play ends with Oedipus’s return to the Sanhedrin, tentatively and tearfully accepting his acquittal.

Watch a public reading of this play