Right to Die Versus Sacredness of Life 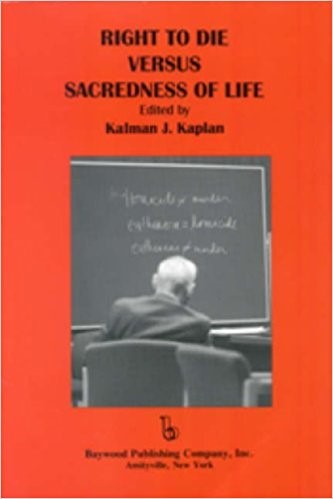 This volume, published as a special issue from “OMEGA – Journal of Death and Dying”, 1999-2000,  presents a number of theoretical and empirical articles on the topic of euthanasia, doctor-assisted suicide and suicide. We have examined the first extended data available in America with regard to the 93 physician-assisted deaths of Drs. Kevorkian and Reding. We examine the roles of biological verses psychological factors in the patient’s decision to actively hasten their death. The role of gender, age, social economic status, ethnic-national-religious ancestry and marital-status have been examined in depth through quasi-psychological autopsies when available, often with very troubling implications. In addition, we present some preliminary work on seven cases of physician-assisted suicides in Australia.

Kalman J. Kaplan, Ph.D., is a Professor in the Department of Psychology at Wayne State University and the director of the Center for Suicide Research and Prevention at Michael Reese Hospital and Medical Center: Chicago, Illinois. Dr. Kaplan is Editor of the Journal of Psychology and Judaism: Religion, Culture and Personality. Dr. Kaplan is also an Editorial Board member of OMEGA: Journal of Death of Dying and has reviewed articles for a number of journals in psychiatry, psychology, religious thought, legal issues, and medical ethics. He is currently a consultant to the American Psychological Association Working Group for End of Life Issues. Dr. Kaplan has published widely in the areas of interpersonal relations and biblical psychology as well as suicide among the mentally and physically ill. He is co-recipient of the 1998 Alexander Gralnick award for best original work on suicide and schizophrenia. Dr. Kaplan is also the author of TILT: Teaching Individuals to Live Together (Taylor and Francis, 1998), which develops an original model of human behavior which proposes an integration of individuation and attachment in human relations. He is co-author of A Psychology of Hope: An Antidote to the Suicidal Pathology of Western Civilization (Praeger, 1993), Living with Schizophrenia (Accelerated Development, 1997), and Jewish Approaches to Suicide, Euthanasia and Martyrdom (Jason Aronson, 1998).