Parables and Riddles in Ancient and Modern Teaching

by Kalman J., Kaplan and Matthew B. Schwartz 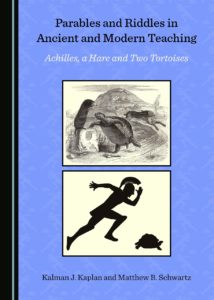 This book is about the difference between parables and riddles, and between different views and definitions of wisdom and various attitudes towards the possibility of its attainment. Both parables and riddles go beyond a simple rote presentation of facts, which may become tedious and likely to be tuned out or rejected. However, there is a major difference between the two. Parables are a dominant form of transmission of information in biblical writings, while riddles dominate those of ancient Greece. Parables transmit an underlying, useful life-message in a way that will not be rejected. Riddles, in contrast, are largely unintelligible, leaving one helpless, unable to derive any life-lesson. This book will be of intellectual value to educators, writers, therapists, story-tellers, clergy, and classicists, as well as anyone interested in the implications of ancient views of wisdom for modern education.